Before I start to rant I want to show you this:

It’s a response from friends after I showed them this advert:

Its style, its delivery- well balanced, not without charm, but ultimately lacking in something- it’s so middle-of-the-road I’m surprised it hasn’t got Coldplay as a soundtrack (or has it?). I don’t love it, I don’t hate it. It has driven me in circles and now I find myself planted firmly in the middle with it (actually, that’s been pretty damn frustrating). It may have produced a pretty luke-warm reaction from folk on Facebook, but it has done enough to get a lot of beer bloggers and tweeters to publish their impassioned opinions.

This advert has had an affect.

It has shown just how enthusiastic we are about beer, how we want to share it with others,  how much it means to us; how it can bring us together; be the simple start to rich experience, and we really don’t like it when it gets misrepresented or just plain overlooked.

But, as with anything, keeping an open mind is key. From all sides.

Regardless of whether you love, hate, or feel absolutely nothing for this advert, the general consensus seems to be that promoting beer, in general, is a good thing (and food & beer pairing seems to be an OK ‘in’ to do so)

So where do we go from here? Or rather, where does the Beer For That campaign go from here? It’s certain that whatever their next step is they need to up the game, get people more engaged, give them some proper direction. The whole matter of this campaign got me thinking: how would I like to see beer promoted? 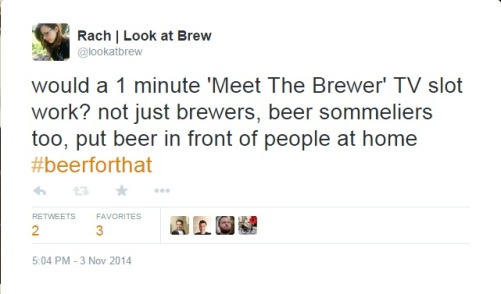 Now, thanks to this post by Ruari O’Toole, I know TV advertising for alcohol is an absolute minefield but, if there’s a way, then how about applying the enthusiasm I see everyday in my Twitter feed, or taking the passion that fuels the creation of new breweries;new beers; new blogs,  the desire to stick your head in a bag of hops because it’s like diving into a fruit cake, or sharing the knowledge, the stories the absolute last-day-on-earth-but-I-couldn’t-be-happier joy that we all have? All this stuff, all this exploration, discovery, inclusion, sheer wonder and want- to- share attitude that we bloggers (or  pro-writers, sommeliers, publicans, bar staff, beer tickers, bottle- shop owners, festival organisers and brewers) have is something worth tapping into. Take a whole bunch of us, give us a minute and with all the gusto I see applied to simple tweets and blog posts, given an audience like that of the ad break between Downton Abbey, we could  get something started.

Each one of us.

One Point of View or

Why not? Aim big.

But everything starts at the grass roots. So maybe I’ll do something for the blog…